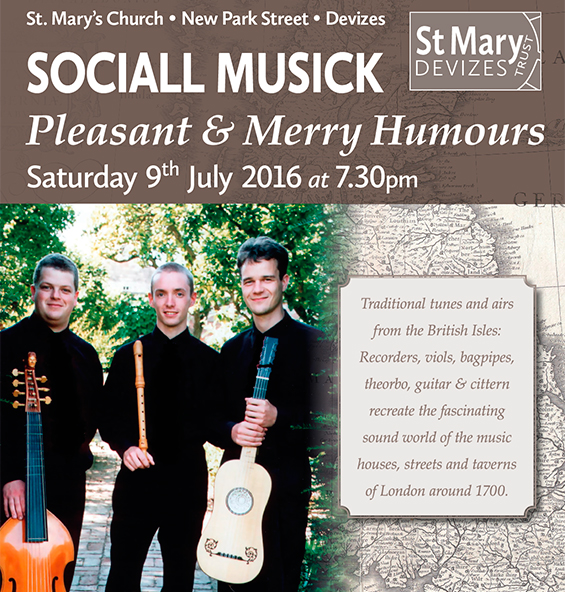 A concert by an Early Music ensemble led by new Devizes resident Owen Morse Brown. This is not the music of church or court, but the sort played at dances, houses and theatres.

We take our name from an essay by Roger North (c.1651-1734) in which he describes the very new concept of a public concert. Until then music was either for a particular purpose (church or court music) or it was just played for pleasure at home or in the local tavern. Towards the end of the 17th Century however, public concerts became very popular and venues called Music Houses were established just for the purpose.

By all accounts these 'concerts' were not quite as refined and sensible as we might think (probably down to the audience rather than the performers!) and music from all walks of life found its way in.

With improvised divisions, lively dance tunes, theatre music as well as art music by the day's best composers Sociall Musick bring to life the sounds of the seventeenth century music houses and taverns.

Listen to some Sociall Musick

Here is a selection of the early instruments played by the ensemble.

The theorbo - is a long necked lute used for playing bass lines and chords at the same time. When it was first brought to England from Italy in the early 1600s customs at the border refused it because they thought it was a weapon of war!

The treble viol - viols are almost a cross between instruments of the violin family and guitars. This is because they are played with a bow but also have frets like a guitar which mean you can play chords as well as melody. Viols were one of the most prominent instruments in England in the 17th century and ones that were made in England became famous all over Europe - a bit like Stradivari in Italy.

The voice flute - this is a kind of tenor recorder but in England right through the baroque period, recorders were known as flutes (the flute we know now was called the German flute). The flute (recorder) was a very popular instrument for gentlemen to play around 1700 in England and numerous tutor books were published. However the standard of playing must have been very high given the quality of music that was also published at the time. Contrary to modern perception, the recorder was a virtuoso instrument thought Europe.