Look under the Floor 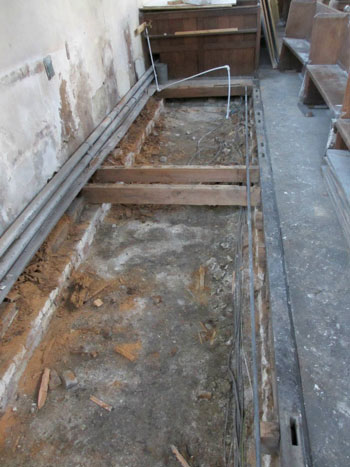 Six pews from the North West corner have been removed as part of the plan to regenerate the church. Following Archdeacon’s permission these pews and the timber floor boards have been lifted and stored, this exposed the joists and joist bearing timbers with their supporting walls.

A significant amount of rot, possibly dry rot, has been discovered in these timbers, many of which crumbled at the touch. We think the floor has been held up by the box-like structure of the pews firmly attached to the floor boards and these to the joists, with the occasional brick pillar. The structural engineer thinks that inadequate ventilation in the sub-floor did not help.

Nothing of interest was discovered under the floor, just disturbed chalk over pure greensand, however on investigation of the boiler room area, known as “the coalhole”, which lies partially under this area it became obvious that the pile of bricks were from the collapsed doming and so a warning has been posted forbidding walking over the top in case it collapses.

Unfortunately the pews ends that were abutting the wall show signs of rot and beetle attack.