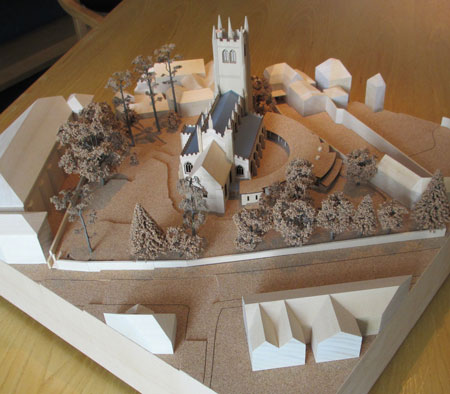 We are extremely disappointed with the Inspector's decision to uphold the refusal of planning permission for our cloister project. However, we shall be reviewing his comments and planning our strategy for the way ahead in the next few weeks.

In the meantime, there are some events in the pipeline for Autumn and Winter - watch this space!

Given the time, on a weekday morning, our supporters were out in force to support the case for St.Mary's cloister plans going ahead.

The hearing was conducted in a professional manner, with polite and relevant questioning from the Inspector, Neil Pope, who viewed the model of the proposed cloister building at close quarters, along with Wiltshire Councl representative Mike Wilmott and our architect George Batterham.

A site visit followed the proceedings at County Hall, with a trip up the Tower for the Inspector and Wiltshire Council representatives alike. The 'key view' from the New Park Street entrance was seen, along with several vantage points from outside and inside the church grounds.

The footprint of the building has been marked out with posts and these will remain for a week or so, should any members of the public wish to visit the grounds and get a feel for the area that would be covered, and an idea of the maximum height of the partly submerged cloister.

It was apparent from the top of the tower that the design would have no impact on this significant vantage point, with visitors having to lean some distance over the edge to get a glimpse of the structure.

Our architect, George Batterham, and planning advisor Christopher Pound put the case well, answering incisive questioning from Mr. Pope in a consistently polite and courteous manner. Mr. Pound's knowledge of planning law and process was invaluable in the preparation and delivery of our case.

They were ably supported from St. Mary's by Canon Paul Richardson, Tony Scorer and Mike Sanders, and from the architects Batterham Matthews by Ben Smith.

The Inspector allowed statements from various supporters to be read out, including a letter from the Bishop of Salisbury, extracts of which were read by Jane Scorer.

Town Councillor Judy Rose put forward her argument in support with forceful eloquence, despite having to use just extracts from her prepared statement. Councillor Nigel Carter, speaking as Ward rep, put forward several salient points regarding the merits of the scheme, as did Tony Duck. We were lucky to have such articulate and sensitive representatives.

The demise of the Assize Courts was mentioned on several occasions and the Inspector seemed to be aware of the fears of the townspeople that something similar may befall St. Mary's church. It was poignant to hear Mr. Chris Greenwood speak of his original plans a similar venture for the Assize Court, only for it to fall foul of various decisions in the past, resulting in the building falling into the current sad state of disrepair.

Jemma Brown clearly outlined the need for such a venue in the town, and this design particularly. In speaking on behalf of arts organisations in Devizes, she used her recent experience of producing Jesus Christ Superstar to illustrate that a) the public are fully supportive of theatrical and artistic ventures such as those run by The Invitation Theatre Company and Devizes Festival, and that b) without the proper facilities it is a 'nightmare' to put on productions of any scale.

See the Gazette's Review of the Hearing

If you haven't read about our plans please view our Project page to get an overview of the cloister plans.